Edit
watch 01:36
We're Getting Mutants in the MCU - The Loop
Do you like this video?
Play Sound

Earth is the third planet from the Sun. It is the only planet known to support life nowadays. Liquid water makes up 71% of Earth's entire surface, and only 29% is solid land. Earth is the largest terrestrial planet and is the fifth largest planet, with the fifth largest natural satellite. It is home to a sapient race of organisms referred to as Modern Humans, or Homo Sapiens scientifically. They have a population of 7.9 billion and is currently causing an ongoing period of geographic mass extinction on Earth.

The Earth formed from a clump of rocky materials and particles about 4.54 billion years ago. It was a molten planet with extreme volcanic activity and had an atmosphere composed mostly of hydrogen and helium, similar to that of the Sun and Jovians' atmosphere composition.

Around 4.53 billion years ago, a massive Earth trojan planet referred to as Theia, came in an unstable orbit around Earth and caused a catastophic collision event. This collision completely obliterated Theia and ripped off Earth's outer crust, throwing back the leftover debris into a planetary ring system, like Saturn. The ring system later clumped together into a molten ball of rock and debris which would be now known as the Moon.

Venus, the Earth's neighboring planet, is classified as its sister due to its similar size and shape. However, they're very different from each other. Venus has ongoing volcanic activity and a thick atmosphere which traps heat on the surface, making a catastrophic greenhouse effect on the entire planet and making life impossible. Earth, on the other hand, is 70.6% water and has an atmosphere of oxygen and nitrogen, unlike Venus.

Other layers include the mesosphere, the region in the atmosphere at which the temperatures drop to below -100 degrees Fahrenheit due to radiation being reflected away from this layer into the stratosphere. This layer is where the majority of the ozone layer is found. The ozone layer is the layer created by the build up of ozone, which is a gaseous substance that absorbs most of the ultraviolet radiation from the Sun.

Clouds are another addition in the atmosphere. These occur when air in the troposphere begins to rise and then fall. The cool air falls since it is more dense and the warm air rises because it is less dense. This process is called convection. When water vapor rises, it becomes heated and continues rising because it becomes less dense. Then, once it rises above the clouds, it cools and condenses, becoming clouds.

It's Only Owned Lifes

Tectonic plates are the makeup of the lithosphere. These plates can be 60 km thick and are the plates that drive the continents. These plates can join together to form boundaries. Some boundaries can cause geographical features such as mountains when they collide and push up the crust plate (convergent boundary), some can cause earthquakes when they slide against each other causing tension (transform boundary), or seafloor spreading when two plates move away from one another (divergent boundary).

Due to this, there is a process called continental drift. Continental drift was founded by Alfred Wegener, and involves all of the continents moving about the Earth, but the change is so small, it is undetectable by humans. This theory proves that Pangaea existed more than 250 million years ago. Pangaea was a supercontinent that combined all of the known continents we know today. Through the process of continental drift, Pangaea split up after going through several changes and shifted into the places the continents are in today.

Earth's orbit takes one Earthern year. This is equal to 365.25 Earthern days. With the extra one-fourth, every four years, the one-fourth becomes a whole and adds an extra Earthern day, making it a leap year.

Earth takes 23 hours, 57 minutes to make one rotation on its axis. This number is mostly rounded to what we know as 24 hours in one Earthen day.

This composite image of Earth and stars taken from the Galileo mission.
Copyright © 1991 Don Barrett 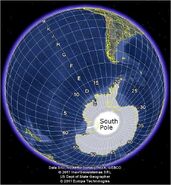 An image of the global hemisphere was captured from Google Earth. 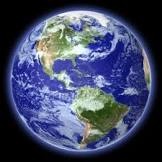 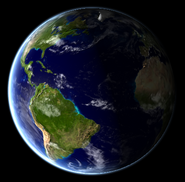 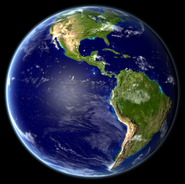