The Solar System Wiki
Register
Don't have an account?
Sign In
Advertisement
in: Gas Giants, Gaseous Planets, Planets,
and 14 more

Featured Article: This Is Recommended For New Users.[]

Jupiter is the fifth closest planet to the Sun, and is also the largest planet. It is such big that many earth can fit inside in it.

It is the most dense planet in the Solar System, and its gravity affects every single planet of the Solar System, especially Earth. Jupiter was known by humanity since prehistoric times, but was only seen Galileo Galilei through a telescope in 1610.

Jupiter's atmospheric composition is made of the same elements as the Sun, hydrogen and helium. However, unlike the Sun, Jupiter does not have enough gravity to begin nuclear fusion and become a star. But Jupiter is at the very edge of becoming a Brown Dwarf Star, as it is denser that the largest exoplanet in the Milky Way.

Season on Jupiter are not very extreme because of his tilt. It takes nearly 12 years to complete his orbit but here the interesting is that t is the fastest rotational planet because it takes only 10 hours to complete one rotation.

Like all the other Jovian planets, Jupiter has a ring system. However, its ring system is the least massive out of all the planets and is much smaller than Saturn's extensive ring system and is barely visible.

Around 23 million years after the Sun formed, the leftover materials gathered together in a dense clump of rocky and gaseous materials which would be Jupiter's core. The core was almost three times larger and denser as the Earth. However, the abundance of various types of gas scattered everywhere in its orbit helped it gather enough particles to grow a gaseous envelope of hydrogen and helium. If the Sun didn't form in the Solar System, it is likely that Jupiter would've been the main host star of the Solar System.

Jupiter's temperature above the clouds can reach -160 degrees Fahrenheit. When water precipitates, everything on Jupiter crystallizes. The surface temperature varies on the climate of the location on a point of Jupiter. Jupiter has hundreds of storms that ravage through the atmosphere. The main one being the Great Red Spot. This storm has been lasting for three hundred years. The atmosphere is mostly made up of hydrogen.

Another storm was the Oval BA storm, also known as Red Spot Jr., is a storm similar to that of the Great Red Spot, hence the nickname. This storm formed several decades ago, and is smaller than the Red Spot, being only about 0.9 Earths in diameter, nearly three times smaller than the Great Red Spot. This storm is located in the southern hemisphere of Jupiter, where it was formed. Three smaller storms collided and formed this storm, only for them to fully conjoin in early 2000.

Greatest of Them All[]

D/1993 F2, or Comet Shoemaker-Levy 9, is a short-period comet that began orbiting Jupiter around the early 1980's. On July 16, 1994, the first comet impacted on 8:13 pm. Before this, the comet split into 21 pieces, and the first one to hit was designated as "fragment A". The other ones collided at different times after the fact. To the right is the picture of the comet once it split into its fragments before it collided into Jupiter.

This is a dwarf moon. 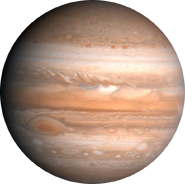 A computer-generated shows the Galileo orbiter heads to Io from Jupiter. 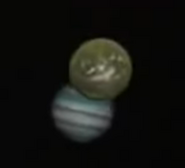 Marduk hypothetical planet near the Jupiter 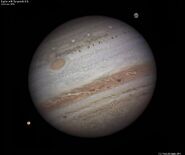 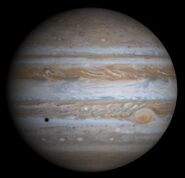 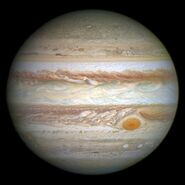 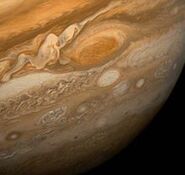