136472 Makemake is a dwarf planet and possibly the largest classical Kuiper belt object (KBO), with a diameter that is about 2/3 the size of Pluto. Makemake has no known satellites, which makes it unique among the largest KBOs and means that its mass can only be estimated. Its extremely low average temperature, about 30 K (−243.2 °C), means its surface is covered with methane, ethane, and maybe nitrogen ices.

First known as 2005 FY9 and later given the minor-planet number 136472, it was discovered on March 31, 2005, by a team led by Michael Brown, and announced on July 29, 2005. Makemake was recognized as a dwarf planet by the International Astronomical Union (IAU) in July 2008. Its name derives from Makemake in the mythology of the Rapanui people of Easter Island. Makemake orbits far from the Sun. 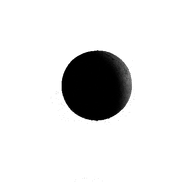