The Solar System Wiki
Register
Don't have an account?
Sign In
Advertisement
in: Terrestrial Planets, Rocky Planets, Planets,
and 9 more

Featured Article: This Article Is Recommended For New Users.[]

Mars is the fourth planet from the Sun. Mars has been discovered and observed since ancient times, like since 5000 BCE. It is referred to as the "Red Planet" because of its reddish hue that is given by the rust of iron oxide in its surface.

Mars is the most similar planet to Earth, because it has water glaciers on its poles and orbits in the outer edge of the habitable zone. Mars has two asteroid-like natural satellites: Phobos and Deimos.

Mars' atmosphere is very thin, about only a hundredth of Earth's atmosphere density. But it still has an abundance of elements and chemical compounds.

Mars's atmosphere is 95% carbon dioxide, 3% nitrogen, 2% and argon and other traces of gases and water. The atmospheric pressure of Mars equals 40 kilometers in altitude on Earth.

Mars is home to the tallest mountain range in the Solar System, called Olympus Mons. It is three times taller than that of Mount Everest. It is also a volcano, but does not erupt anymore and is now a type of extinct volcano referred to as dormant volcano. Its last eruption took place about 15 to 8 million years ago.

Another geographical feature is the Valles Marineris, which means "Mariner Valleys". It is 700 km in width, leaving the Grand Canyon in the dust only reaching 20 km in width. It is believed this valley was flooded with water in the past.

The volcanic activity, more referred to as volcanism, has caused lava flows over the few millions of years, leaving behind trenches on the surface that can be viewed through even amateur telescopes on Earth. Examples of volcanism can be traced by to Olympus Mons, which is a possibly dormant shield volcano on the surface of Mars. It has not erupted in thousands of years, yet its last eruption shot a replete of debris into the atmosphere, causing a blackout for weeks. The lava is actually black.

Main Articles: Phobos and Deimos Mars harbors two moons in its gravitational pull, named Phobos and Deimos. Phobos, the larger and denser of the two, is home to the Stickney crater, a crater that is easily spotted to the right of the moon. Phobos was discovered by Asaph Hall in 1877. The next moon, Deimos, is the smaller and more irregular-shaped moon, which stands to reason that it was an inhabitant of the Asteroid belt. It was too discovered by Asaph Hall in the same year. 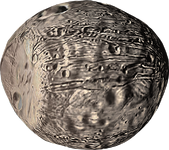 The larger of the two moons, Phobos. 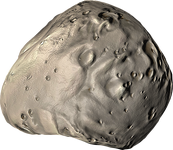 The smaller and more irregular-shaped of the two moons, Deimos.

A composite image shows the Martian landscape at night were taken from the Viking lander.
Copyright © 1991 Don Barrett

In this Viking 1 image, the canyons are filled with mist from frost sublimated by the early-morning sun.
Copyright © 1991 Don Barrett

This image was taken by Mariner 9, which orbited and photographed Mars during 1971 and 1972.
Copyright © 1991 Don Barrett

An artist view of Mars with the background starfield.
Copyright © 1991 Don Barrett

An artist conception of Mars One landed on Mars. 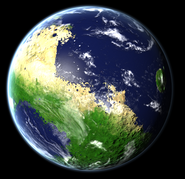 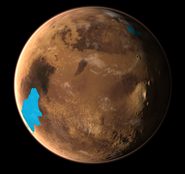 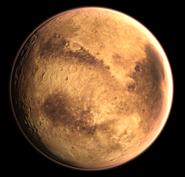 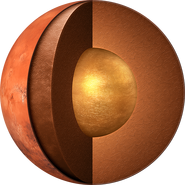 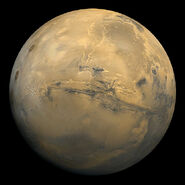