Featured Article: This Is Recommended For New Users[]

Mercury is the closest planet to the Sun. It is the smallest planet in the Solar System, reaching only 4879.4 or 3001 miles km in diameter. It is so small that it is smaller than Saturn's moon Titan and Jupiter's moon Ganymede.

Even though Mercury is the closest planet to the Sun, it is not the hottest (which the title belongs to Venus) but that doesn't mean its temperature is bland. A day on Mercury is 430 degrees Celsius in temperature and a night on Mercury can freeze at a temperature of -180 degrees Celsius. Why does Mercury have an extremely large temperature range? That's because of its atmosphere. Mercury's atmosphere is so thin that it's barely a metric ton dense. The very thin atmosphere allows most of the space radiation, heat, and coldness from the Sun to arrive at the surface.

There are two theories of Mercury being formed.

2. Mercury formed just like all the other terrestrial planets, as first a volcanic clump of asteroids and particles. It was the third planet from the Sun but its orbit was disturbed by the Sun's gravity and was placed as the first planet.

The surface of Mercury is heavily cratered. The best known of these craters is the Caloris Basin, which is about one thousand miles in width. Ancient volcanoes show signs that volcanism was once present on this planet. The rest of the surface include cliffs and plains that became solid, which is a process called solidification. This solidification created these volcanoes.

The core is thought to consist of iron, which happened due to the amount of accretion the nebula received when it created the Solar System. Around that is a silicate mantle, where the convection currents occur, shifting tectonic plates. The last is the crust, which suffers from asteroid impacts and volcanism.

Mercury can be easily seen during twilight or just after the sunset. The visibility cannot remain for long due to its speedy orbit around the Sun. The elongation, or the point at which a celestial object is at its farthest point from a solar remnant, of Mercury from the Sun is the best time to view it, though this event only occurs seven times a year.

An artist conception of the planet Mercury near the Sun.
Copyright © 1991 Don Barrett

An artist's view of the Sun shows the spot (Mercury) to be visible.
Copyright © 1991 Don Barrett 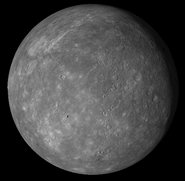 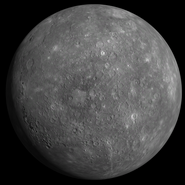 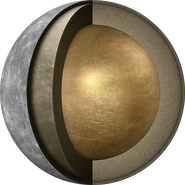 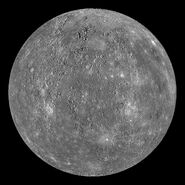 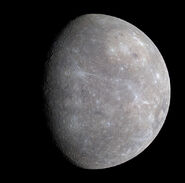