This article is about Luna, You may be looking for Moons.

Luna, (Known as Earth I) more commonly referred to as the Moon, is the Earth's natural satellite and is the 5th largest spherical moon in the Solar System. Yet, it is the largest in the Solar System in relation to its host planet, being only one-fourth smaller than Earth

It's unknown how the Earth's moon was created. We know that the moon was bombarded by meteorites and over time was filled with lava and violent volcanic activity as well. The Moon was later cooled by water from meteor impacts along with the Earth, thus ending the heavy late bombardment period.

The interior structure of the Moon is similar to the Earth. The first layer is dirt and the second layer is crust. The beginning of the internal structure is the mantle. Under the moon's upper mantle is a hollow space.

The Moon has an atmosphere. The Moon is covered with caverns, craters, and meteorite impacts from millions of years ago. The largest and probably most known crater is the Swift crater, caused by a meteorite impact from about five hundred million years ago.

The Moon's composition of gases inside of the regolith, or any rock harder or visibly darker than the surrounding rock, acts upon the surface, causing dark spots on the Moon to form called "maria", or non-plural, "mare". These maria are also caused by the debris that is kicked up into the atmosphere due to meteor impacts from the inner regions of the Solar System. When this debris returns to Earth, it stains the land and causes dark patches, which are the maria.

Since the Moon is heavily cratered, many of the famous craters are found here, such as the South Pole-Aitken basin, being the largest crater in the Solar System, taking up about 2240 kilometers, taking up about three-sevenths of the surface of the Moon.

The term "blue moon" describes the second full moon to appear in one lunar month, which is approximately 29.5 days. The term does not describe the color of the Moon during this period, for the origin comes from a misinterpretation of a definition from the 1946 issue of Sky and Telescope.

Eclipses are, in solar terms, difficult to "create". The diameter of the Sun is four hundred times that of the Moon, yet the Moon is four hundred times further away from the Sun than the diameter of the Sun, therefore making it appear that the Moon is just as large as the Sun. The Moon has to align in such a way as to make this appear this way, therefore creating the "difficulty".

Annular eclipses are eclipses caused when the Sun and Moon are in an exact line, yet the size of the Moon is apparently smaller than that of the Sun. This causes the Sun to become a bright disk called the annulus.

A total eclipse occurs when the Moon completely blocks out the Sun's annulus, therefore blocking out, not only the Sun but the Moon itself. Therefore, even on a phase, excluding a full moon, such as a waning gibbous, there will still be no visible Moon.

A partial eclipse is an eclipse that occurs when the Sun is not completely in line, causing the Moon to only partially obscure the one, which the name "partial" eclipse implies. Partial eclipses can appear to be different eclipses at polar regions, for the umbra may not act as concentrated on the other regions, therefore creating this perspective.

Shadows of an Eclipse[]

Eclipses are a result of shadows, which causes the Moon or Sun appears to be dark during such an event. Two main shadows are involved in the illusion of an eclipse, and they are listed below. 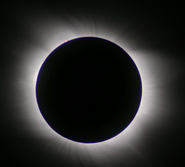 A total eclipse is when the entirety of the Sun is covered, and only the corona and chromosphere (which cannot be seen at any other time without a special telescope) can be seen around the disk of the Moon. 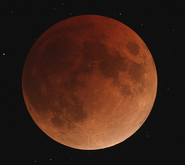 A lunar eclipse can be seen above, where the Earth is between the Sun and the Moon. The reddish hue of a lunar eclipse is due to the small amount of sunlight that is reflected from the Earth's nightside's atmosphere. 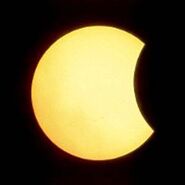 A partial eclipse can be seen, where the moon can be seen obscuring a portion of the Sun. This is not the same perspective seen around the entirety of the planet, for the umbra apparently more stretched out in this region of the world.

Due to the Earth rotating on its axis about twenty-eight times faster than Moon makes one orbit around Earth itself, this causes the gravitational pull of the Earth and Moon to become "dragged", therefore causing surface water of Earth to bulge. This causes the water to compact into large waves as it reaches the shore called "tides".

Many factors play a role into the height of the waves though: the friction created through the Earth and Moon's gravitational pull, the inertia, or non-movement, of the water, and the movement of the ocean surface. Therefore, the height of the tides are determined through these factors. As the movement of the surface increases, the water begins to move faster until approaching the shore, which pushes up the water, continually increasing the size.

Despite a combination of few gases, the Moon has no physical atmosphere surrounding the surface, therefore asteroids can easily impact the surface with little restriction. This is responsible for the thousands of craters upon the Moon's surface, by which asteroids continue to crash into the surface, leaving more and more. Few elements have been discovered in the atmosphere such as potassium and sodium. Yet, basic nutrients of an atmosphere, which include nitrogen, oxygen, hydrogen, and carbon, are not found in the atmosphere yet in the regolith.