Phobos was created by Mars' land. Mars actually went through a bombardment period and land was pushed up into the atmosphere by a giant meteor. The rocks clashed together, creating tension. The heat fused the rocks together and created the moon we named Phobos. Phobos, surprisingly, looks like an asteroid.

Phobos is full of craters and valleys. Impacts are very conspicuous because there is no atmosphere to protect it from impact, normal for a moon. The Stickney crater is a giant gash in the upper regions of Phobos. In the upper left of the picture on the right, you can see the Stickney crater, a crater created by a large meteorite impact. 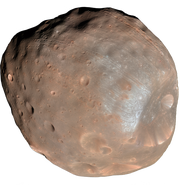