The Solar System Wiki
Register
Don't have an account?
Sign In
Advertisement
in: Gas Giants, Hypothetical Bodies, Planets,
and 3 more 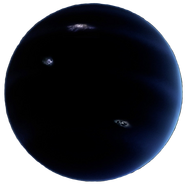 Planet Nine, also known as, Planet X or Phatte, is a hypothetical planet hypothesized to exist in the outermost edges of the Solar System, possibly in the Oort Cloud.

It is thought to be about 42,000 kilometers in diameter, probably larger than Earth but smaller than Neptune. Many official names have been suggested for Planet Nine, like Ophadamia and Erebus.

It is probably composed of the same materials as the ice giants, like hydrogen, helium, methane, water, and ammonia. It is also likely to have a simple ring system similar to that of Neptune's. Because of its distance from the Sun, it is hypothesized that a year on Planet Nine would take around 20,000 years!

It is still unclear how Planet Nine could have gotten into the outer Solar System.

Recently, scientists observed clustering of objects beyond Neptune's orbit, and that something large was affecting their stability.

This led to the theory of a ninth planet existing in the outermost edges of the Kuiper Belt, but no such planet was found.

Later, scientists theorized that Planet Nine could be a black hole. But this theory isn't widely accepted.