Pluto is the second closest dwarf planet to the Sun, or the ninth planet. It was discovered on February 18, 1930 by astronomer Clyde W. Tombaugh. It is the largest object in the Kuiper belt but less dense than Eris. It was originally referred to as the ninth planet, but was demoted into being classified as a dwarf planet in 2006 because of its size.

Pluto's natural satellite, Charon, is half the size of Pluto. In fact, it is so big that Pluto orbits Charon too. But the IAU has yet to formalize a definition for a binary dwarf planet system, so Charon is classified as a satellite for now.

Pluto has 5 natural satellites. Charon, Nix, Kerberos, Hydra, Styx. Kerberos and Styx will stay while the other 3 won’t be around. Charon is half of Pluto's diameter. Nix and hydra will de-orbit Pluto and drift away.

Pluto was formed from a clump of rocky materials and particles around 4.5 billion years ago between the location of Neptune and Uranus.

Not much is known about Pluto's surface.

Scientists theorize hydrocarbon atoms form when the Sun's light rays hit Pluto's surface, which could explain why Pluto's snow looks a bit reddish-brown. However, artist depictions describe Pluto's surface as being a bumpy place being made of rock. Pluto has numerous caverns and mountainous areas.

Pluto does not have a significant atmosphere. It has a thin envelope of gas that is most likely made up of nitrogen, methane, and carbon monoxide, that develops in equilibrium with solid nitrogen and carbon monoxide ices on the surface as it approaches the Sun. As Pluto moves away from its perihelion (closest point to the Sun), more of its atmosphere freezes and falls to the ground. When it returns to a closer proximity to the Sun, the temperature of Pluto's solid surface will increase, causing the nitrogen ice to sublimate into gas—creating an anti-greenhouse effect. Much as sweat evaporating from the surface of human skin, this sublimation has a cooling effect and scientists have recently discovered, by use of the sub-millimeter array, that Pluto's temperature is 10 K less than they expected. 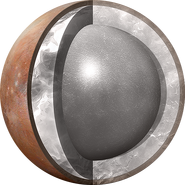 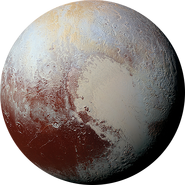 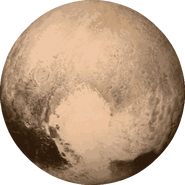 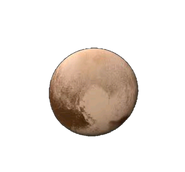 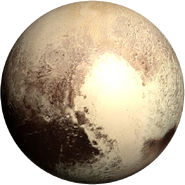