Sedna'('90377) Sedna is a large trans-Neptunian object that was, as of 2012, about three times as far from the Sun as Neptune. Spectroscopy has revealed that Sedna's surface composition is similar to that of some other trans-Neptunian objects, being largely a mixture of water, methane and nitrogen ices with tholins. Its surface is one of the reddest in the Solar System. It is probably a dwarf planet. For most of its orbit it is even farther from the Sun than at present, with its aphelion estimated at 937 astronomical units (31 times Neptune's distance), making it one of the most distant known objects in the Solar System other than long-period comets. Sedna's exceptionally long and elongated orbit, taking approximately 11,400 years to complete, and distant point of closest approach to the Sun, at 76 AU, have led to much speculation about its origin. The Minor Planet Center currently places Sedna in the scattered disc, a group of objects sent into highly elongated orbits by the gravitational influence of Neptune. However, this classification has been contested, because Sedna never comes close enough to Neptune to have been scattered by it, leading some astronomers to conclude that it is in fact the first known member of the inner Oort cloud. Others speculate that it might have been tugged into its current orbit by a passing star, perhaps one within the Sun's birth cluster (an open cluster), or even that it was captured from another star system. Another hypothesis suggests that its orbit may be evidence for a large planet beyond the orbit of Neptune. Astronomer Michael E. Brown, co-discoverer of Sedna and the dwarf planets Eris, Haumea, and Makemake, believes it to be the most scientifically important trans-Neptunian object found to date, because understanding its unusual orbit is likely to yield valuable information about the origin and early evolution of the Solar System. Sedna (provisionally designated 2003 VB12) was discovered by Mike Brown (Caltech), Chad Trujillo (Gemini Observatory) and David Rabinowitz (Yale University) on November 14, 2003. The discovery formed part of a survey begun in 2001 with the Samuel Oschin telescope at Palomar Observatory near San Diego, California using Yale's 160 megapixel Palomar Quest camera. On that day, an object was observed to move by 4.6 arcseconds over 3.1 hours relative to stars, which indicated that its distance was about 100 AU. Follow-up observations in November–December 2003 with the SMARTS telescope at Cerro Tololo Inter-American Observatory in Chile as well as with the Tenagra IV telescope at the W. M. Keck Observatory in Hawaii revealed that the object was moving along a distant highly eccentric orbit. Later the object was identified on older precovery images made by the Samuel Oschin telescope as well as on images from the Near Earth Asteroid Tracking consortium. These previous positions expanded its known orbital arc and allowed a more precise calculation of its orbit. Sedna so far it like far IS planet nine football Pictures 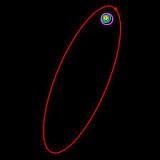 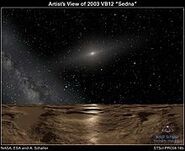 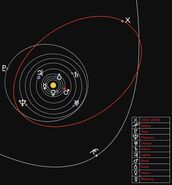