The Solar System Wiki
Register
Don't have an account?
Sign In
Advertisement
in: Stars in the Solar System, Solar Remnants, Objects Maintaining Hydrostatic Equilibrium,
and 5 more

The Sun is an average sized G-type Main Sequence Star, or a Yellow Dwarf, located at the center of the Solar System.

It is 1.4 million km in diameter and is 94.4 million miles (or 1 astronomical unit) to Earth in distance. It is 1.989 × 10^30 kg in mass, or a million times more dense than the Earth and a thousand times more dense than Jupiter. Because of its massive gravity, it is able to keep all the objects in the Solar System in a stable orbit.

The Sun's surface burns at a temperature of 5504 degrees Celsius and its core boils at a temperature of 15 million degrees Celsius. The reason the Sun emits so much heat is because of the nuclear fusion power that fuses hydrogen into helium in its core, allowing it to release extra energy and emit serious amounts of light and heat. This keeps the Sun in a stable state and position, but will not last long.

The Sun's atmosphere is called the corona. The corona can only be seen during an eclipse. The corona is one trillion times less dense than the photosphere, yet it can reach three million degrees Celsius. It extends millions of miles into space. Though the corona is the main atmosphere, before it is what is known as the transition region, the point at which the temperature transitions from the hotter parts of the photosphere, which is 36,000 degrees Fahrenheit, to the corona, reaching 1.8 million degrees Fahrenheit.

The Sun formed from at the center of the rotating disk of materials that was once known as the Solar Nebula.

The Sun firstly formed as a Brown Dwarf and then later a T-Tauri Star, then entered Main Sequence as it gained enough mass for fusing hydrogen into helium.

In around 5 billion years, the Sun's core will get exhausted of hydrogen and enter a subgiant phase, where the Sun enlarges its size of about 3 ~ 10 times its current diameter. In around 7.8 billion years, the Sun will enter a red giant phase and engulf Hermes, Cybel, and Hephaestus's orbit and vaporize the entire three planets. After engulfing Hephaestus's orbit, the Sun will start experiencing thermal pulsations and cause massive coronal mass ejections, blowing off 25% of the Jupiter's mass into outer space and possibly vaporizing Mars's outer crust.

Once enough mass is gone, the Sun will start shrinking and eventually detach all of its atmosphere, leaving them as a planetary nebula that would stretch into the interstellar bubble. The final remains of the Sun will be its former core, a white dwarf, which is the size of Earth's diameter but being half of the Sun's normal density. It will stay as a white dwarf for around a trillion years, until its final energy source has disappeared, leaving the Sun as a black dwarf. This will unstabilize the orbits of all the planets in the Solar System and most likely eject the Kuiper belt and the Ice Giants.

The Sun will transform into an iron star when the only stable elements in the universe is iron. It will stay like this until the final stage of the universe, proton decay.

When a comet gets close to the Sun, the ice will start to melt with particles and dust. Then these particles make a cloud called the coma.

A comet called Skara-0A99 smashed into the Sun in 2014, it burned and broke into 55 pieces. Then, a series of 32 explosions occurred, that passing comet was sucked into the sunspot.

Solar flares are outburst of flames from solar wind, which can reach speeds one million kilometers per second. Solar flares release an abundance of radiation to the Earth, sometimes knocking out powerlines and causing power outages. Solar flares can reach extend one hundred thousand miles from the surface of the Sun. Solar wind is one cause of the extent due to the escape velocity of the Sun being 55 times the Earth's.

A prominence is an outburst of plasma from the photosphere, extending into the upper corona. No one is sure exactly how these prominences are formed, yet these can extend for thousands of miles across the surface of the Sun. Sometimes, these prominences can form in front of the Sun. They are then referred to solar filaments. These can last for weeks and can cause coronal mass ejections.

Sunspots are small dark patches on the surface of the Sun, whiched marked strong pockets of magnesium. These occur due to magnetic activity that reduces the surface temperatures. These occur only once every eleven years. These spots can spread to be 50,000 miles in diameter. The inner cooler part of a sunspot is called umbra. The outer, paler part is called the penumbra. One Of These Sucked In A Comet That Flew Too Close, The structure of sunspots are granule, penumbra, and umbra. Galileo saw sunspots with a telescope. Sunspots can be as big as the Earth.

Solar wind is the outburst of energized particles that can shoot off into space. These particles can reach speeds of over one million miles per hour. When these particles collide with atoms in the Earth's atmosphere, the aurorae light show is then formed.

A coronal mass ejection (CME) is an outburst of plasma from the Sun that is heading out into space. These mass ejections can reach speeds of seven million miles per hour. These can be caused by prominences and solar flares. During a solar maximum, which is the time when an eleven-year process is at its peak of occurrences, up to five ejections can happen in one day. When these collide with Earth's atmosphere, they can cause aurorae that are very strong. They can even possibly interfere with radio communication devices.

A solar quake is a series of waves that travel across the photosphere of the Sun after a previous solar flare. These waves are clearly visible through space telescopes. They appear as a ripple in a pond, yet they can reach to be four miles high. They can even extend to be eighty thousand miles long. They can even reach speeds of two hundred thousand miles per hour.

When prominences are viewed in front of the Sun, they are called solar filament. This makes it appear darker than the surrounding area. Spicules are short-living jets of gas that appear on the surface of the Sun.

Granulation occurs when the Sun's photosphere appears to be sandy or mottled, hence the name "granulation". This occurs from convection currents of plasma in the convection zone of the Sun. The heads of these convective cells appear grainy and this causes the photosphere to appear to have granules.

The visible surface of the Sun. This layer can reach to be ten thousand degrees Celsius.

The convective zone is the layer beneath the photosphere. This layer is where the convection currents occur. Hot gas bubbles fall due to them being less dense than the surrounding air, so they rise. Then, after rising and becoming cooled, they become dense and then sink. This causes the photosphere appear to be boiling.

The next layer is the radiative zone, a zone where heat from the Sun's core is radiated to the convective zone. Radiation is the process at which heat is transmitted from one object to another.

The core is the last layer of the Sun, making up only two percent of the Sun's volume, yet making up 60% of its mass. This is also where photons, tiny packets of energy, are released, yet they take one hundred thousand years to travel to the photosphere. The core of the sun’s temperature is 27,000,000°F (15,000,000°C).

Orbit around the Milky Way[]

You may only view the Sun with a telescope with solar filters place in front of the lenses. These blocked out unwanted light, yet be careful on how you find the Sun. Do not look at it directly without the protection of these filters. If you cannot find or afford filters, place a piece of cardboard in front of the main eye of the telescope. Take this telescope on the right for example.

The Sun is the brightest, biggest and hottest object in the Solar System. 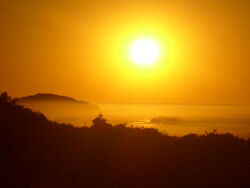 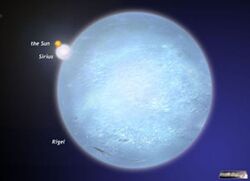 The Sun compared to Sirius A and Rigel. 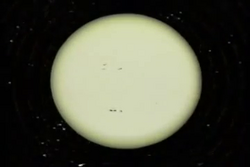 An artist impression of the Sun and a starry background.
Copyright © 1991 Don Barrett 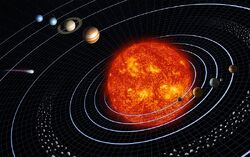