The Solar System Wiki
Register
Don't have an account?
Sign In
Advertisement
in: Planets, Terrestrial Planets, Rocky Planets,
and 16 more

Featured Article: This Is Recommended For New Users.[]

Venus is the second closest planet to the Sun. It is referred to as Earth's sister planet due to its similar structure, size and mass.

Although Venus is not the closest planet to the Sun (in which the title goes to Mercury), it is in fact the hottest. That's because Venus has a thick and dense atmosphere of carbon dioxide and sulphuric acid. Under the atmosphere, the temperature rises up to 475 degrees Celsius, and the pressure is equal to 92 bars (That's the pressure of 1 km depth into the ocean on Earth).

The chemicals inside Venus's clouds (like acidic crystal and sulphuric acid .etc) are capable of reflecting light efficiently. This allows Venus to reflect back most of the light from the Sun it receives. This is also the reason Venus looks so bright in the night sky (The second brightest object after the Moon).

Venus was formed from a massive clump of asteroids and particles during the formation of the inner Solar System about 4.54 billion years ago. It had more intense volcanic activity than any other planets, although it didn't suffer a heavy bombardment period like Earth. The heat and liquifying process shrunk Venus in size.

About 3.9 billion years ago to 715 million years ago, Venus could've also had water in liquid phase, a stable atmosphere and orbited in the habitable zone. This means that Venus also could supported lifeforms similar to Earth's, like in multicellular structure or a carbon-based biochemistry. Intelligent races could also have evolved, but this theory is unlikely.

Venus' atmosphere is mostly made of carbon dioxide which heats the atmosphere. This causes the greenhouse effect, which makes Venus the hottest planet in the Solar System. The temperature will collapse on Venus can reach nine hundred degrees Fahrenheit. Due to the combination of gases, Venus rains sulfuric acid from the atmosphere, which can also ignite many lava oceans, sending gases into the air, contributing to the density of the atmosphere. Due to the dense atmosphere, Venus' atmospheric pressure is more than ninety times that of Earth, contributing to a large amount of rock formation of the surface and no carbon cycle.

Venus's atmosphere is 96.5 percent carbon dioxide, which contributes to a lot of the heating of Venus. The rest is made up of 3.5 percent nitrogen. Other trace gases include neon, helium, carbon monoxide, etc.

There are also traces of phosphine inside Venus's clouds. Why is this so important? That's because phosphine can only be produced by living things! But no such living thing was found on Venus, since it's environment is too hostile and harsh for normal organisms. However, scientists hypothesized that there might be bacteria living in the clouds of Venus where the temperature is similar to Earth's.

Many surface features are found on the surface of Venus, including volcanoes, rivers filled with lava, and many other features that contribute to the heating, the denseness of the atmosphere, and many other factors. Volcanic plains are common on the surface, which also contribute to the amount of sulfur located in the atmosphere. Few impact craters are located on the ground, for due to the thick atmosphere, very few comets and asteroids have collided with Venus. The atmosphere stopped these asteroids very well, however, for the impact craters are no more in diameter than three miles.

· Venus had liquid water 3.9 billion years ago and was the first planet in the Solar System to have had actually supported life, even before Earth and Mars.

· In 7.9 billion years, Venus' dense atmosphere will be blown away by strong solar winds, and it will eventually be violently engulfed by the Red Giant Sun, although it has a 20% chance of surviving the catastrophe. 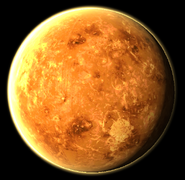 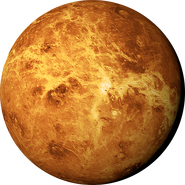 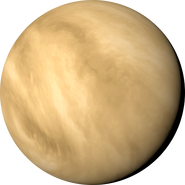 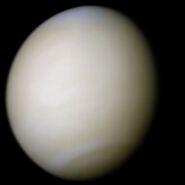 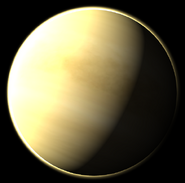